McManus Challenges "Awaken The Hero Within!" 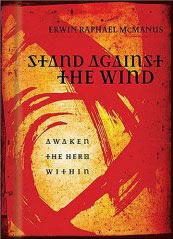 Just finished Erwin McManus' Stand Against The Wind: Awaken The Hero Within. While I was originally drawn to the rather small book because of it's graphic appearance, I think it's a great book. (As a graphic designer, you know how I'm a sucker for a well-designed book!)

Stand Against The Wind is a focus on character; who we are rather than what we do. McManus covers such characteristics as humility, thankfulness, perseverance, authenticity integrity, love, endurance, patience, courage, generosity, and wisdom. He also discussed freedom, the fear of the Lord, and being personally engaged with God.

The book is an encouraging study of your character encouraging you dream the big dreams God has given you and to become all that God has created you to be. It's scriptural and culturally relevant.

I started Stand Against The Wind quite a while ago and I'm really glad I finished it, but I'm not in the "place" I was when I originally picked it up. For that reason, it wasn't speaking to me the way I've been craving lately.

Lately ... I've been really "hungry." I feel like I'm just not getting the spiritual nourishment that I need. While I've been practicing some meditative reading and prayer - it's been mostly focused on feeding others lately and not for my own nourishment.

Some of the books I've been picking back up have been helping direct me to the appropriate places in God's word. I mentioned in my previous post about Miller's Searching For God Knows What and I'm also going through Dave Ferguson's The Big Idea, a more practical look at the way we communicate our overall messages at church.

While The Big Idea is generally a practical book, God has "hit me between the eyes" today with something. I feel I've been dealing with a great deal of "holy discontent" (as Bill Hybels calls it). Please pray for me, God has encouraged me to step forward in a way that is a bit frightening. We'll see what becomes of it.

I'll just keep in mind something that McManus suggests: When you fear God, you fear nothing else!
Posted by Eric at 3:26 PM