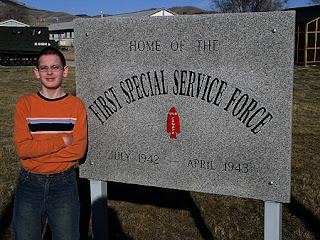 Andrik has been working on his Helena History Project for school most of the year. His topic of study is the Devil's Brigade, the First Special Service Force (FSSF). The FSSF was the original special military force created in World War II to fight the Germans using stealth ops. Their training tactics are the basis for modern forces such as the Green Berets, Navy Seals, and Delta Force. They were formed and trained at Fort Harrison, right here in Helena.

We did quite a bit of research online, but got a chance to visit the Montana Military Museum (at Fort Harrison) a few weeks ago. We were honored to meet (and Andrik interviewed) Captain Mark Radcliffe, an original member of the Devil's Brigade. What an amazing experience.

I'd like to post some of the photos, Andrik's report, and some of our research in another post later. For now, I wanted to tell you he filmed his report this last week. Sometime after the school year, the collection of all the students' reports will be aired on Montana PBS.