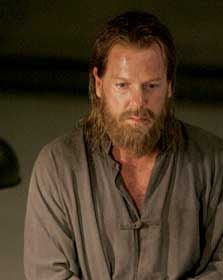 Well, of course not. But Jack Bauer, the lead character from the hit television show 24, does seem to be "type-ish" of Jesus. In Christian-ese, that means that his characteristics and actions are similar to, or in some ways mimic those of Jesus.

"The trailer repeatedly says that Jack "must be sacrificed" to save the multitudes who will supposedly be given life through his substitionary death. Does this sound like anyone you know? A young, healthy, innocent guy dies for a whole bunch of people and willingly lays down his life as a sacrifice for them?"

Do you see the similarities? Leave a comment and tell us what you think.
Posted by Eric at 9:14 PM