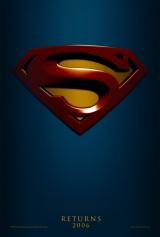 ANOTHER REMAKE?
Originally, I was not at all interested in seeing Superman Returns. I think I misunderstood the commercials as portraying the new movie as a remake of the 1978 Superman: The Movie with Christopher Reeves. Although I figured the plot line might be a little different and the CGI would be much better, most everything else would be similar (even the music).

While browsing Google reviews, I read that the movie was actually a sequel to the original Superman movies - a Superman 4 if you will. At that point, I was much more eager to see the movie.

LOOKING FOR REALISM AND AUTHENTICITY
First of all, I guess with this Superman movie I was hoping for something a little more realistic and less "fairy tale" than the earlier movies. For instance, I really hated the original Batman movies, but loved Batman Begins. I wasn't looking for a gritty Superman at odds with "truth, justice, and the American way," just something real and authentic. Here are my thoughts...
THE CHRIST STORY IN FILMS
As we got to this point in the movie, my old understanding of successful film formula kicked in. You see in every successful, popular film we see the vague rendition of the Christ story...
So then it hits me hard , I'm watching the Christ Story. Yeah, I know it's different and all the points don't line up - but it's a lot like the Gospel. (Another warning: This is a major spoiler)
THE WORLD DOESN'T NEED A SAVIOR
There is some dialog between Superman and Lois Lane that goes something like this. Upset that Superman went away for some years, Lois came to the conclusion that "The world doesn't need a savior?" Hmmm... Then Superman takes her up in the sky (yes, kinda like the first one), and responds. He says, "What do you hear?" She says, "Nothing." He replies, "You hear nothing, but I hear a million voices crying out for a savior." (He has "super" hearing.) Wow! That is a definite parallel with the world and the true Savior!

THE POINTI'm hoping you're getting my point here. My point is not whether I liked the movie or not. We can and should use popular culture as a common ground to share our faith. With the story in Superman, you could talk to a child about what Jesus has done!

There are many Christians that shelter themselves from the world and it's culture. It is one thing to not be conformed to the culture, it is another to not even be aware of or understand the culture. Jesus didn't hide in the synagogue during his ministry years. He walked among the people, even quoting lines from common plays of the day. We can do the same.

So get out there. See a few movies. Take a friend, share a lunch, and talk about Jesus. Don't forget to visit HollywoodJesus.com to help you scope out this spiritual themes to discuss. The world does need a Savior!
Posted by Eric at 10:07 PM