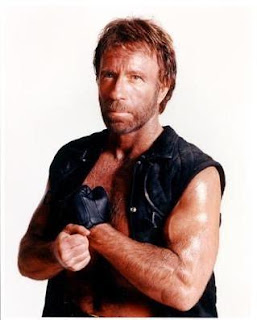 No doubt you've heard of martial arts action hero Church Norris? He's the star of many films including The Octagon, Delta Force, Missing in Action as well as the TV series Walker Texas Ranger.

Well, I came across this website called Chuck Norris Facts that cracks me up. Apparently, I am late on the bandwagon on this because it's been around since 2005. Chuck Norris Facts contains many satirical "facts" that focus largely on about Norris' toughness. Here's a small sample, but I encourage you to visit the site for many more, as well a the favorites picked out by the man, himself.
I'd like to hear if you can come up with some original Chuck Norris Facts...
Posted by Eric at 12:23 PM