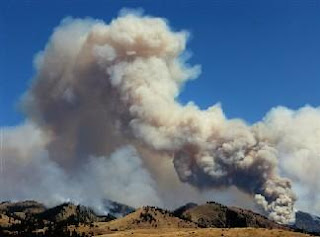 In case you haven't heard, most of the Northwestern U.S. is on fire. We have several fires here in Montana, one of which is the Meriwether fire (after the area named after Meriwether Lewis of Lewis & Clark fame).

The Meriwether fire is just on the outskirts of Helena - we can see it from our kitchen window. It looks just like the AP photo here. Apparently, this fire is now the nation's number one fire priority. It's been burning since mid-July and they don't have any way of stopping it until snowfall (in about 2 months). Eeeek!

Andrea and I have been cautiously watching the progress of the Meriwether fire, praying it doesn't come over the hill into North Helena.

Check out the local article here.
Posted by Eric at 10:14 AM