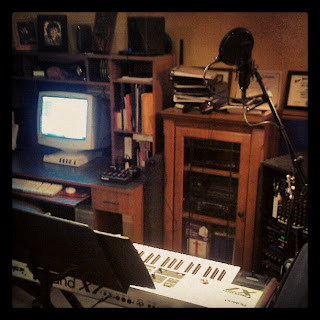 While I've been immersed in music, worship, and church planting for the last 15 years, much of my creative efforts have been spent more on effective leadership, discipleship, and ministry rather than my personal love of songwriting.

I've been a songwriter, developing my craft since I was at least 16 years old. Even at that age, I was fortunate enough to gain experience performing my own original music at a small restaurant in my home town.

In my college years and beyond, I took it further by joining forces with another skilled musician and we formed the band Turning Keys. Our claim to fame was opening for Flock of Seagulls a few years after their heyday.

It was around that time I became a follower of Jesus and it took me a while to explore what that would mean for my art and identity. Of course years later, God has used those skills and talents while developing new ones in leading worship for His people. I learned how to play and lead a band in a live worship environment.

So with this break in paid ministry, God has stirred up those creative juices for songwriting again. I've been working on recording a few standard worship songs in the studio, as well as writing some new songs as well. While we are still mixing and mastering these, here are a couple preliminary audio clips I hope you enjoy.

Listen to these links and more at my SoundCloud demo set.