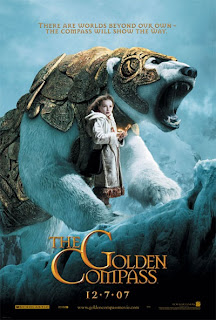 This is part 1 of 3 in a series about the new movie "The Golden Compass" and the book series by Philip Pullman entitled "His Dark Materials." View part 2 or part 3

If you are not aware, a new movie called The Golden Compass came out yesterday, December 7. Just that morning, I had first heard of a controversy surrounding the movie. Christians are calling for a ban of The Golden Compass and thoughts of believer's reactions to the "Harry Potter" series and The DaVinci Code came to mind.

To be completely honest, we Christians made a big deal about The DaVinci Code. At Hannaford, we addressed on Sunday morning some of the untruths propagated by the film. But I found DaVinci to be a slow, uninspired film that was just kind of silly. Just because Dan Brown said some things about church history, doesn't make them true. The "Harry Potter" films, too, are fantasy and rather entertaining - but I do understand the concerns. In these cases, I think it is important to keep in mind the nature of our culture. We need to find a way to build a conversation with people about these issues and we may find that these controversies can help people actually come to know Jesus. We need to be known more for what we are for, than for what we are against. If you know me well, I firmly believe that Jesus longs for us to redeem culture by becoming part of the marketplace of ideas rather than withdrawing ourselves.

At the same time, if you know me, you also know I love movies. And more accurately, I love good storytelling - especially with the fantastic ability for movies to speak to our native language - the visual. I also enjoy identifying the story of Christ or elements of our faith in stories, even when the author/director/producer had no intention of revealing these elements. You can see this in my previous posts where I often explore faith at the movies.

With all this said, I had seen the trailers and was intrigued to see The Golden Compass yesterday. More on this in my next post.
Posted by Eric at 2:07 PM