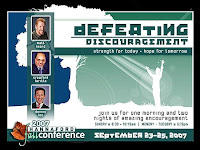 The 2007 Hannaford Fall Conference wrapped up tonight. Wow! Each year, I am amazed at how God brings together complete strangers (except in Christ) and allows a cohesive theme to be communicated in a unified way.

DEFEATING DISCOURAGEMENT
This year was truly about "Defeating Discouragement." Dennis Lee is a gifted ventriloquist who is quite encouraging with his stories. Crawford Loritts spoke on Philippians 1 about having a Godly perspective and then having Godly pursuit. Matt Heard spoke in his three session from 2 Timothy 2:3-6; Defeating Discouragement ... as a Soldier ... as an Athlete ... and as a Farmer.

The conference ended tonight with Matt Heard's final encouragement to pastors (and others). It was related in a story about a missionary and his wife who had served translating in Africa.

Upon returning home to the U.S. after many years in the mission field they were on the same plane as President Roosevelt. There was a great greeting when the plane landed with people applauding and the band playing to celebrate the return of the President from Africa - but no one was there to greet the returning missionaries. After the President left, all the welcome party and the band left as well - and the missionaries were left alone. Quite discouraged that they had not received any recognition for returning home, God spoke to them a simple realization: "You are are not home, yet."


Matt then asked all the pastors and their wives to stand and he walked around the room telling each couple to their face, "You are not home, yet."

As we closed with Paul Baloche's Hosanna, I briefly explained the meaning behind this Hebrew term meaning "Save Us!" Hosanna is a call for help and it is what the people cried and sang as Jesus entered Jerusalem on a donkey in the fashion of a king. The people wanted deliverance from the Roman oppression. Little did they know that he would die a criminal's death upon a cross by the end of the week. Their hope was crushed. They were discouraged. But the message was the same ... "You are not home, yet." God had a larger plan to not so much free us from physical oppression, but from spiritual oppression. So when we are discouraged, we can still cry "Hosanna! Christ Save Us!"

PHOTOS
While I didn't find the opportunity to find someone to take photo this year, I snapped a few with my phone during our last speaker. Click on the photo to the left to go to the gallery. If we run across any others, I'll add them to the gallery.

WORSHIP CENTER UPDATE
The new sound and video systems worked pretty much glitch free - that is quite amazing since we really didn't get it up and running until the day before the conference. There are just a few more things to install and others to adjust before all will be considered done on the technical side. The new Worship Center also has several other important things to be finished. We still have not installed the furnace or air conditioning, for example.

We recorded all the sessions held in the main Worship Center. As soon as (and if) we get permission from the speakers, we'll post MP3s on the Hannaford site or make them available for order. I haven't checked yet, but we might have a sample of the worship as well.

FAMILY UPDATE
I am very tired and sore (especially from my falling incident on the stairs - see EEK!). We've gotten very little sleep in the last four days, and the Powell's have had very little family time in the last three weeks. With all that said, we are all looking forward to a little normalcy right now.

Thank you, God, for a great conference experience this year ... and for everything else going on at Hannaford. I pray we stay focused on You in the expected lull after this great high.