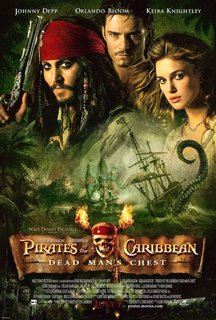 Yes, we are one of the many that have helped this sequel break so many box office records. As for the movie itself, I really enjoyed it. I think it really delivered with swashbuckling sword fights, love, and adventure (until the end).

As far as spiritual themes (I have not yet consulted HollywoodJesus.com), the clearest seems to be those of purpose and choice. The character Captain Jack Sparrow struggles with both in the movie. Sparrow possesses a "magic" compass that will "point you toward what your heart most desires."

Unfortunately, whenever Sparrow consults the compass, it spins around without giving any direction. Even from the first movie, Sparrow struggles between being a typical "bad" pirate, and choosing the "good" path. In the end, he does not know what he wants. Like so many of us, we have a choice. The world tells us we have a certain path, that certain things are okay - but inside we know there is another choice, some of us finally choose that path and become children of God.

A big (really, really big) disappointment for me was the film's end - it didn't. Apparently there is a third movie to be released. I actually understand that they filmed both at the same time, much like the filming of the Lord Of The Rings (LOTR) trilogy. However, it didn't work for me in Pirates. Every single plot point is unresolved like they just stopped and saved the rest of the footage for the next film. It worked for LOTR because it already was an established trilogy. But it does not work for pirates.