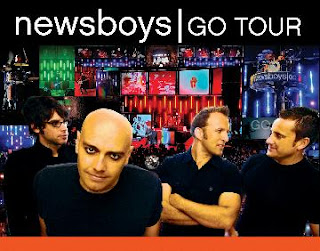 On Wednesday, the "fam" and I went to see the Newsboys in concert (in Missoula). There were actually four bands playing: Article One, New World Son, Rush of Fools, and the Newsboys.

First of all, I've never heard of them, but Article One (a band from London, Ontario) was fantastic. They were only the opening band, but they were full of energy, had a great rock sound, and a violin player that rocked. Seriously!

Second of all, the Newsboys on this "Go" tour was the absolute best concert I've ever seen. Seriously! Lights, media, music, all hits, great sound, deep conversation. Wow! This was both of the boys' first concert, too.